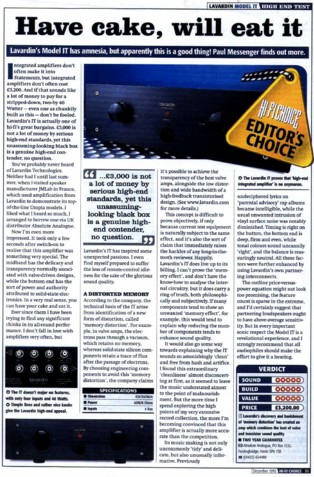 It's not often that our consultant Editor Paul Messenger gets all worked up about an amplifier. It would be even more extraodinary if he threatened to abandon the trusty stack of Naim amps that have kept him in watts for most of his long and illustrious career. However, like his saintly Biblical namesake, Paul has had a Road to Damascus experience Listening to the Lavardin Model IT integrated amp has caused scales to fall off his ears. But what on earth can a 40-Watt, four input integrated amp offer, that Naims finest cannot match?
According to Paul, the secret lies in Lavardin's claim that so called "memory distortion" is the problem with many audio components. Lavardin claims that electrons pass through solid-state silicon components, the latter retain a trace of their passing. Valve amps avoid this because they use electrons passing through a vacuum. Whatever the explanation, the valve-meets-transistor sound of the IT has knocked Paul for six. This is news indeed, and merely for the shock-factor alone, the Lavardin IT has been selected as this month's Editor's Choice.

Integrated amplifiers don't often make it into "Statements", but integrated amplifiers don't often cost ï¿½3,200.
And if that sounds like a lot of money to pay for a stripped-down, two-by 40 watter (even one as chunklly built as this) don't be tooled.
Lavardin's Model IT is actually one of the hi-fi's great bargains.
ï¿½ 3,000 is not a lot of money by serious high-end standards, yet this unassuming-looking black box is a genuine high-end contender, no question.
You've probably never heard of Lavardin Technologies. Neither had I until last summer, when I visited speaker manufacturer JM-Lab in France,wich used amplification from Lavardin Technologies to demonstrate its top-of-the-line Utopia models. I liked what I heard so much, I arranged to borrow one via UK distributor.
Now I'm even more impressed.
It took only a few seconds after switch-on to realise that this amplifier was something very special. The midband has the delicacy and transparency normally associated with valve-driven designs, while the bottom end has the sort of power and authority attributed to solid-state electronics. In a very sense, you can have your cake and eat it.
Ever since then I have been trying to find any significant thinks in its all-round performance. I don't fall in love with amplifiers very often, but Lavardin Technologies Model IT has inspired some unexpected passions. I even find myself prepared to suffer the loss of remote-control idleness for the sake of glorious sound quality.

According to the company, the technical basis of the Model IT arose from identification of new form of distortion, called "memory distortion". For example, in valve amps, the electrons pass through a vacuum, which retains no memory, whereas solid-state silicon components retain a trace of flux after the passage of electrons. By choosing engineering components to avoid this "memory distortion", the company claims it's possible to achieve the transparency of the best valve amps, alongside the low distortion and wide bandwidth of a high-feedback transistorised design. (See www.lavardin.com - technical corner- for more details).
This concept is difficult to prove objectively, if only because current test equipment is naturally subject to the same effect, and it's also the sort of claim that immediately raises the hackles of any long-in-the-tooth reviewer. Happily, Lavardin Technologies Model IT does live up to its billing. I can't prove the "memory effect", and don't have the know-how to analyse the internal circuitry, but it does carry a ring of truth, both philosophically and subjectively. If many components tend to show an unwanted "memory effect", for example, this would tend to explain why reducing the number of components tends to enhance sound quality.

It would also go some way towards explaining why the Model IT sounds so astonishingly "clean" and free from hash and artifice. I found this extraordinary "cleanliness" almost disconcerting at first, as it seemed to leave the music understated almost to the point of malnourishment. But the more time I spend exploring the high points of my very extensive record collection, the more I'm becoming convinced that this amplifier is actually more accurate than the competition
Its music making is not only uncommonly "tidy" and delicate, but also unusually informative.
Previously undeciphered lyrics on "parental advisory" rap albums became intelligible, while the usual unwanted intrusion of vinyl surface noise was notably diminished.
Timing is right on the button, the bottom end is deep, firm and even, while tonal colours sound uncannily "right", and the balance is reassuringly neutral. All these factors were further enhanced by using Lavardin Technologies interconnects.

The outline price-versus-power equation might not look too promising, the feature count is sparse in the extreme, and I'd certainly suggest that partnering loudspeakers ought to have above-average sensitivity. But in every important sonic respect the Model IT is a revelational experience, and I strongly recommend that all audiophiles should make the effort to give it a hearing.